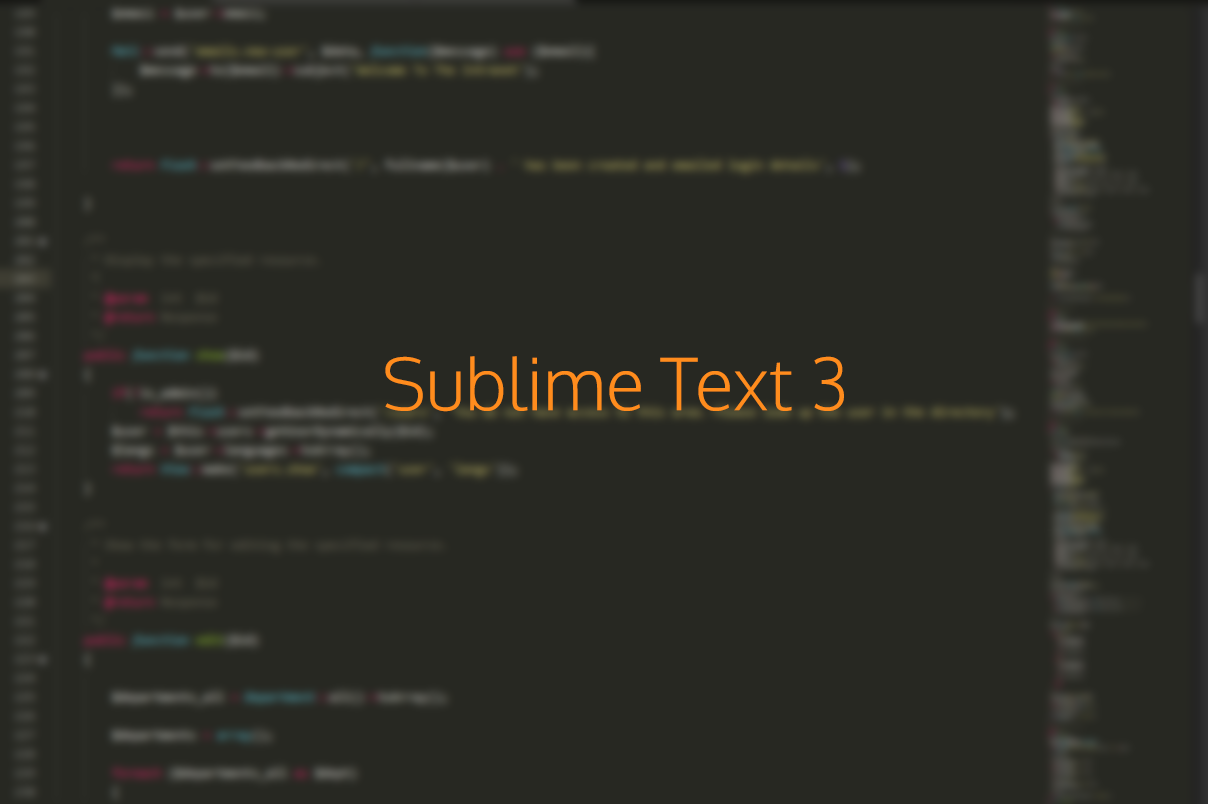 This month marks the two year anniversary of making the jump from Notepad++ to SublimeText. Reflecting upon the last two years, Sublime has made life so much easier. The plugins, shortcuts and just how it works helps productivity so much but is it time to much on?

Sorry for that slight click bait first paragraph it was too tempting! In my eyes the main reason to use a text editor over bog standard Notepad is because it increases productivity & efficiency; therefore reducing frustration. Sublime gives a lot of flexibility and customisation to allow you to make it an extension of your body..let me elaborate..

Lets kick it off with my settings I use:

A lot of these settings are personal preference and materialistic so take them as you will. They just make it much easier to see states etc "highlight_modified_tabs": true, at a glance you know instantly something isn’t saved. As you can see the second to last setting may seem redundant since Vintage is ignored. Vintage (a vi mode for Sublime) is something that I would love to use and have been messing about with but it will take a while to get used to not autopiloting to the mouse and learning all the new shortcuts.

The plugins I have acquired and regularly use over the last two years have been so helpful. Some go without saying such as Package Control, others I have added over time.

Reflecting upon these a lot of them are code generation.. some might call it lazy, I call it efficiency!

Ctrl + D - Multiple Selection - When having to go through and change an occurrence of something this makes a repetitive task a two second job.

Ctrl + P - Goto Anything - When having to go through and change an occurrence of something this makes a repetitive task a two second job.

Ctrl + R - Goto Symbol - When having to go through and change an occurrence of something this makes a repetitive task a two second job.

When using new software I tend to try and find as many shortcuts that I will take advantage of as quickly as I can. I don’t want to bore you too many with shortcuts so let’s move on!

An unsung feature of Sublime is being able to quickly switch between projects. Saving a project is as easy as saving a file. The hitting Ctrl + Alt + P allows you to choose the project to switch to. This instant switch means browsing some code from another project and switching back has no impact on your productivity.

Sublime is a great tool for general tasks, it acts as a notepad for me, quickly jot things down, dump something I have in my clipboard for later. The easy ability to record anonymous macros (I made that up) means making a repetitive task such as preparing some content with markdown (such as list items) a much less RSI inducing task.

But is it time to move on?

Hell no! There will always be room on my PC for Sublime, the paragraphs above show that I have a good relationship with Sublime, it will always be my go to get shit done editor and still be the default program for all my files. Now that I a much more focused on purely doing backend development I have decided to start using a fully fledged IDE that offers specific support for PHP. I have seen a lot of developers in the community spotlight using PHPStorm so I thought I would look into trying it out. I have been using it for about two weeks now and absolutely love it. PHPStorm just offers so many features out of the box it blows my mind. I don’t want to harp on about PHPStorm too much because that’s a blog post in of itself!

Move a side oh sweet sweet Sublime, it’s time to go polygynous all up in this biatch!